Tracking one of the region’s rarest plants 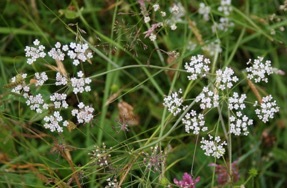 Plant surveys are a useful starting point to any land management. Interpretation of the variety, abundance and associations of species can inform many useful parameters such as management, pH, moisture content, soil fertility, and of course, biodiversity value and change.

A plant of particular interest was Whorled Caraway. Martin Mere is the only remaining site in England outside the south-west to host this flower which requires wet, unimproved pastures. In 1975 the plant was confined to just one field. But with careful management and probably some wind and avian assistance, the plant has very slowly colonised more fields on the site. This year our survey recorded it in the western most grassland for the first time, just over a kilometre from the original 1975 population.

The NVC is a way of identifying plant communities, based on the findings that given the similar soils, management, climate and geography plants will grow in characteristic associations.

The survey found that where the peat was deepest mire communities were found; whereas rush pastures dominated the cattle-grazed pasture and acidic grassland species, such as the evocative Devil’s Bit Scabious, were found on the drier fields. However, the majority of the fields at Martin Mere keyed-out as sedge-lawns, characterised by their rich flora of largely flood-tolerant species; these communities are traditionally maintained by a naturally high water-table and annual late-summer hay cuts. The ditches that criss-cross the site were a rich source of aquatic plants, including several rarities such as our discovery Lancashire’s first record of Floating Club-rush for over a century.  Golden dock, another rare plant nationally, was found in abundance along the drawdown margins of the marshes, among the wonderfully named Bidention communities.