The ‘Marina Village’ plan is one of seven key projects chosen for further development through the “Brilliant Barrow” initiative, allocated for regeneration to provide an area of high-quality mixed housing and nature conservation.

New reptile habitat areas were created at the rear of the Marina Village and at North scale on Walney Island. Allowing slow worms and common lizards to be transferred away from the main housing area while encouraging new wildlife into the nature conservation zones.

Habitat enhancement works was instigated by Barrow Brough Council in partnership with Capita Property and Infrastructure.

The works comprised of clearing of existing litter and vegetation within the designated areas, which would be used as receptor sites, and would be under the instruction of a project ecologist. Working on two sites, one at the Marina Village off Cavendish Dock Road and North Scale Walney Island.

The enhancement of both receptor sites and the creation of reptile refugia and basking areas within both designated sites. This project will provide safe refuge for the relocation of common lizards and slow worms of which both of these species are protected under the Wildlife and Countryside Act 1981.

All works were carried out under the direction of the project ecologist. All litter around the areas identified for vegetation clearance were picked and bagged for disposal off-site to a suitable waste disposal site.

All trees that were too large to be removed by this method were felled and the stumps carefully removed using the excavator under the instruction of the project ecologist.

All Brambles and other similar vegetation were cleared by strimming or use of a brush cutter and the roots were grubbed up using the excavator under the direction of the project ecologist.

CCNW teams created brash piles which were constructed in the designated locations of both receptor sites using the materials obtained from the clearance operations. All surplus material arising from the clearance of vegetation works was removed from the site and disposed of to a suitable waste disposal site.

CCNW teams also carried out the creation of log pile refugia which were constructed in the designated locations of both receptor sites using the materials obtained from the clearance operations. The log pile refugia were stacked neatly within open ground and tied down securing them.

Several reptile basking areas for slow worms and lizards were created using the 100-150mm clen stone imported and placed within the cleared areas.

Low fertility soil habitat areas were created using the soil imported to the site and placed within the designated locations, under the supervision of the project ecologist. 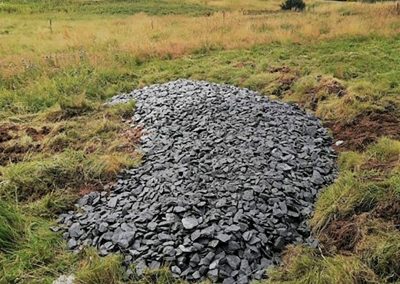 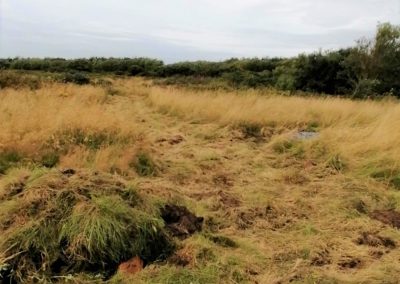 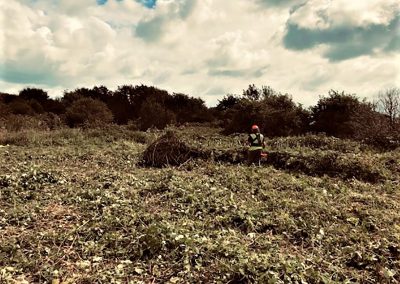 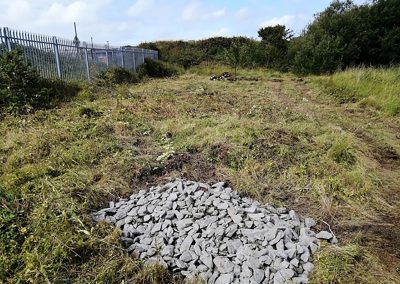 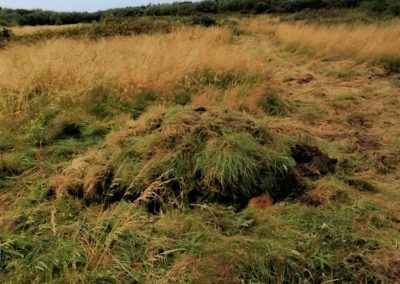 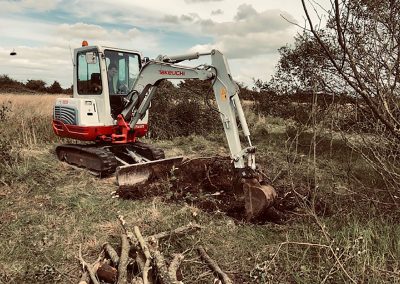 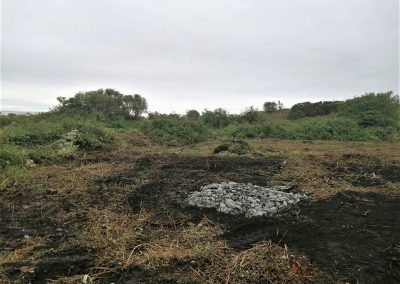 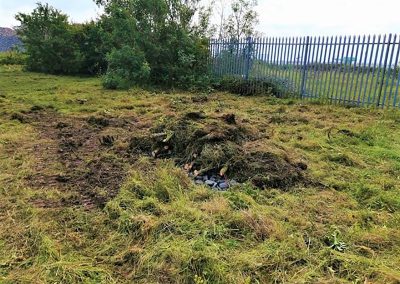